Flea Bites vs Bed Bug Bites: How to Identify

No matter what you do, the bites seem to just keep accumulating.  After a while, you become fairly certain that you are getting them while you are inside your home.   Then you start to get clear about the fact that they are not likely from a mosquito.  There are many creepy crawlers that could possibly be chomping on you.  There are many creepy crawlers which could be biting you  difference between flea bites and

investigating bites is not the most ideal strategy to identify your creepy crawling culprits, it can give you some direction – particularly if you have reason to believe you were bit somewhere other than your own home.   Once the bed bug or flea perpetrators have been identified, a proper verification strategy should be used to confirm your suspicions.

You could also make things easy on yourself and call a professional.  In Oklahoma or Kansas you can just call a bed bug exterminator with flea elimination expertise for a free inspection. 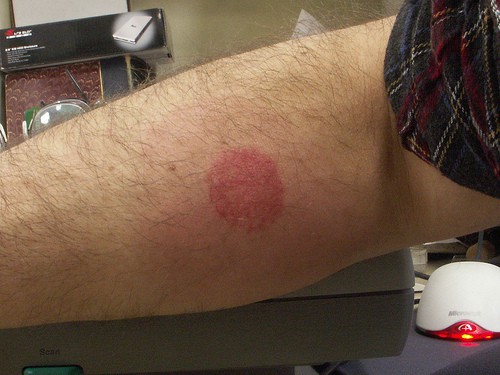 Oklahoma man suffers from his allergic reaction to a bed bug bite.

Allergic reactions can make the identification somewhat more challenging due to swelling.  Both flea and bedbug bites produce allergic reactions in some individuals (see image)  That said, this guide is not intended to provide a diagnosis or medical advice. It your bites are swollen and painful and last more than a couple weeks you should seek medical attention.

If the flesh around your bite is starting to rot away – that might be different.  In that case, you have probably been bit by a brown recluse. If you are collecting new bites on an ongoing basis, eliminating the infestation should obviously be of the utmost importance (unless you’re into that kinda thing).

Regardless of what kinds of bugs gave you the bites, you will likely want to get rid of them ASAP.  If bites are the only evidence you currently have to work with, this guide will help you gain establish some clarity in your situation, and help you determine the best course of action to take care of your problem immediately.

How to Identify Flea Bites

Whether you have pets or not, there is still a chance that your bites are from fleas.  Flea bites generally manifest as red spots in the Middle with reddish circle surrounding the bite. In many cases they will cause discomfort and are likely to itch.

Fleabites generally manifest as red spots in the Middle with reddish circle surrounding the bite. In many cases they will cause discomfort and are likely to itch.

Flea bites on humans are likely to be on the arms, legs, and feet in small groups of three or four.

What do bites look like on dogs and cats?

Bites are generally little red dots on dogs and cats.  For some pets, flea allergy dermatitis (flea allergy) can result in infections, hair loss, and excessive scratching.  Its not a pleasant experience to watch.

Is it possible to get bites without dogs or cats?

Yes, it is actually fairly common. Generally in homes that are not brand new, the fleas likely wound up in the home for a previous animal in the home.  If you do not have a dog or cat, but you are getting bitten by fleas, it may actually be more difficult to get rid of them. Many flea elimination strategies involve treating pets vs treating the actual environment.  Without your furry creature, it will take a bit more of a strategic approach.

What diseases do flea bites transmit?

The same plague that eliminated a good portion of the European world back in the Middle Ages.  It can still infect your dog, cat, squirrel, or other furry creature.

If your dog eats a flea that happens to be carrying tapeworms then it might not be good. There’s a good chance they will soon have tapeworms hatching in their intestines, causing illness, irritation, and vomiting.

How to Identify Bed Bug Bites

In 2011, the National Pest Control Management Association reported that one out of five Americans has had a bed bug infestation in their home or knows someone who has encountered bed bugs at home or in a hotel.  In 2015, they repeated the Bugs Without Borders survey and found there are more bedbugs everywhere.

It’s unclear exactly how many people in the US are dealing with bed bug infestations at any given time.  This is mostly due to the fact that people are embarrassed about the problem so they choose to try to ignore it or act like it ins’t happening.  There are several ways to go about trying to get rid of bed bugs on your own, but that is not a strategy you want to try.  Ignoring the problem will only ensure the problem spreads.

Bed bug bites generally come in a variety of shapes and sizes on humans, particularly due to the fact that everyone reacts differently. Bites can range in appearance – anywhere from small, pinkish bumps that are all in a localized region of the body up to welts and hives which can be covering the majority of the body.

Bites tend to be very itchy and also appear in rows of three or four.

The bites sometimes cause a delayed reaction which can produce signs only after several days of being bit. Some people will have severe allergic reactions, causing intense itching and swelling.

While bed bugs prefer to snack on humans, they will take whatever they can get.  Many people believe animal fur makes it difficult for a bed bug to reach a dog or cat’s skin.  The truth is, the bugs will eat on whatever they can get ahold of.  They are much less picky than some may believe.

Bed bugs are not known to have ever transmitted any diseases to humans, however, they are known to carry a few pathogens including typhus, anthrax, tularemia, yellow fever, and relapsing fever.

Hopefully this gave you some clarity as to whether you are dealing with bed bugs, fleas, or something else entirely.  Regardless what kinds of pests are keeping you up at night, you can always call us 24/7.  We offer a free inspection and we have professional, experienced pest control experts on staff.  Our objective is to put an end to your pest control problems swiftly and safely.

For immediate assistance, find the location nearest to you below.